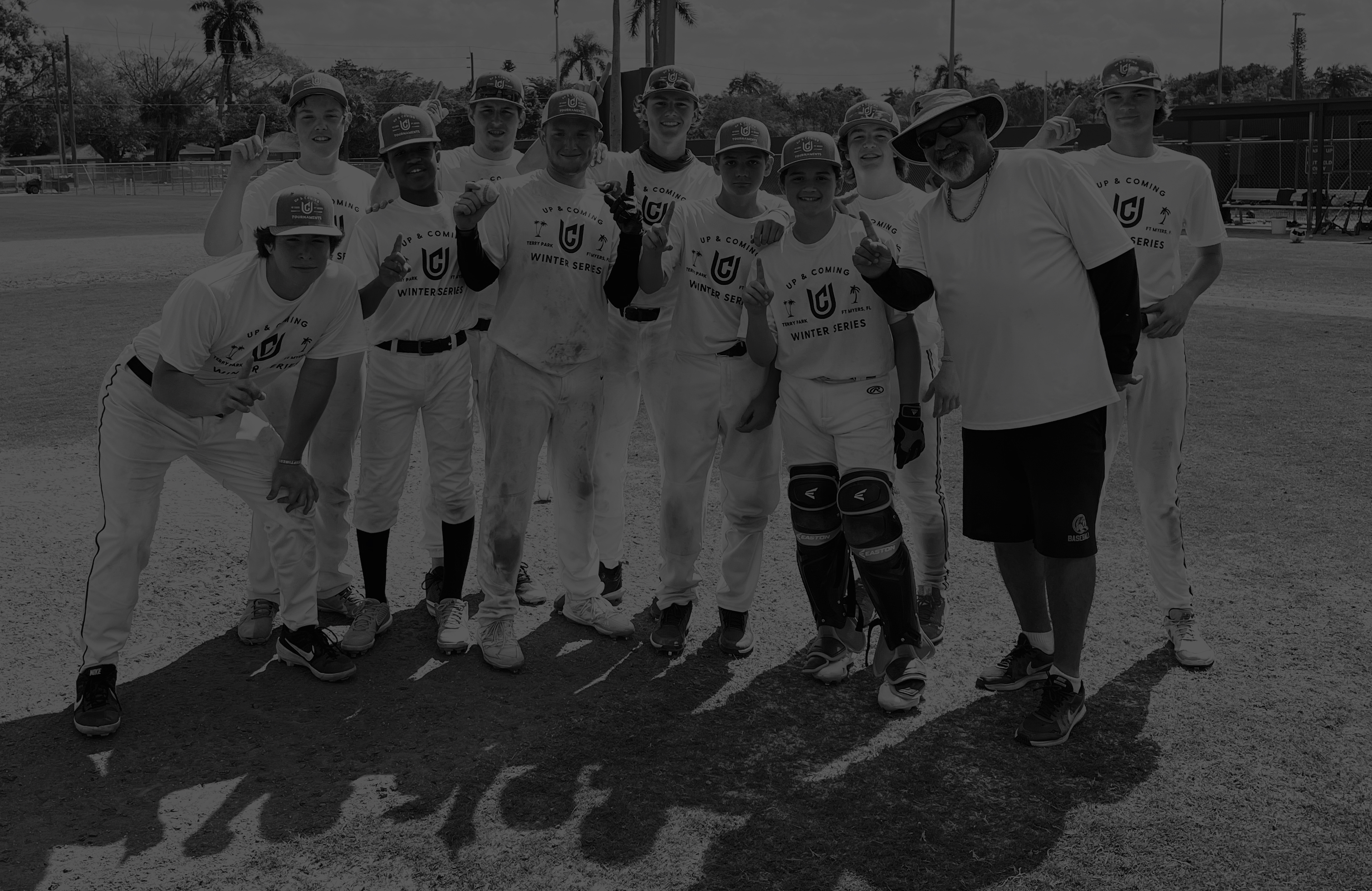 Historic Terry Park in Ft. Myers, Florida was the scene for the Presidents’ Day edition of Up & Coming’s Florida Winter Series. The event featured players from several cooler climate states like Illinois, Missouri, Michigan and Wisconsin. The event featured a total of eight games, with the majority of them being competitive and the championship ending on a sac-fly.

2023 Outfielder/LHP Landen Graves showed well all weekend, smashing a couple balls for extra base hits and running an event best 6.68 60. He was also up to 81 on the mound, earning a win for his team.

2023 1B/OF/LHP Carson Kaye was another upperclassmen that proved to be a standout performer. Kaye showed terrific feel for the barrel, leading the event in extra base hits. He possesses a very physical frame, and his swing path allows his barrel to stay through the zone, producing hard hit balls up the middle of the field.

2023 Infielders Tyler Floyd and Landon Potts both turned in quality performances, helping the Red team at the plate and on the bump. Floyd was arguably the event’s top performer at the dish, showcasing a high level swing pattern that creates natural loft and good carry on balls that he barrels. Potts hit several pull side line drives for singles and extra base hits, while showing developing actions on the infield. He was also excellent on the mound, leading the event in strikeouts.

A few other standout upperclassmen were Dallas Phillips (Michigan), Alex Ford (Missouri) and Andre Carl (Michigan). Phillips led the event in fastball velo, topping out at 87 mph from the right side. The Adrian College commit filled up the zone and has a projectable frame that will allow him to continue to add velo as he heads into his senior year. Ford on the other hand was more of a finesse pitcher, utilizing several pitches to keep hitters off balance. His gutsy performances on the mound were one of the primary reasons the White team was able to walk away victorious. Andre Carl (Michigan) delivered the best performance of the weekend statistically speaking, as his complete game for the Gray team handed the white team its only loss of the weekend. Carl has an athletic, projectable frame and was able to land all 3 of his pitches for strikes. If he adds velo, he will be an arm that generates a lot of collegiate interest.

One of the most striking aspects of this event were the amount of extremely talented underclassmen. Steven Whitted was an immediate standout because of his clean infield actions during the showcase portion of the event, as well as his plus bat speed from the left side. He was able to utilize these tools in game as well, producing several hits, stolen bases and smooth actions on the infield. Joseph Rutledge of the White team was the youngest player at the event, but that didn’t stop him from having one of the better performances of the weekend. His infield actions are excellent and he demonstrated a patient approach to compliment a balanced, linear swing. Once he develops physically as an athlete, he has a chance to be an elite high school player. 2025 OFer Jack Burle stood out at the plate, putting together one of the better BP rounds and amassing several hits over the course of the weekend. His skillset in the outfield is still developing, but he creates natural extension in his swing and clearly has feel for the barrel at a young age. It is easy to imagine him becoming a legitimate power bat as he gets older.

It was a memorable weekend at Terry Park, and it will be exciting to see how these players progress in the next six months through their high school and travel ball seasons.